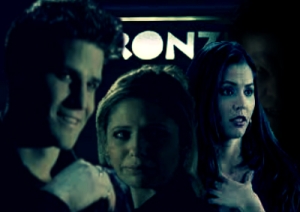 Cordelia showed up at school still wearing the same thing she’d worn the night before, after finding Rosa she couldn’t bring herself to go into her room yet even to get something from her closet. She’d just buy new clothes.

Making her way straight to the library she stopped outside the doors for a moment to compose herself, before breezing through like normal. She needed help and she had a feeling that this was a Buffy kind of problem, the message on the wall had all but screamed vampire after all.

No one was there. What? They were always here, like the lifeless nerds they were, where the hell were they? Finally Giles came out of the stacks carrying a large number of old dusty books as usual.

“Good, Giles you’re here I kind of need Buffy’s help where is she?”

“Buffy has decided to take the day off from school to deal with her, well with her emotional, crisis that she’s experiencing right now.”

“You mean the Angel thing?”

“Yes.” He seemed almost relieved that she’d understood what he was trying to say.

“Cordelia while I’m sure that whatever crisis you are having seems very life or death to you I believe we need to give Buffy a little time to get back to being herself.”

“Cordelia please, I am very busy with research and I have a staff meeting to go to, I would appreciate it if while I was gone you found somewhere else to be.”

He left! He just freaking left. Are you kidding? She is having an actual honest to god situation here and everyone is too busy with Buffy’s love life to help her. That was just so… so… so… her luck these days.

Fine if no one else would help she would do this herself. How hard could it be? Turning back to look at all the books she wondered where she would find the one about her problem. Maybe under D for dead maid?

“You should have seen the look on her face. Priceless.”

Angelus had just finished moving his family into the abandoned mansion that was their new home and now they were talking about what to do next while simultaneously snickering about the slayer.

“Worse and it looked like she’d been crying for days it was hilarious.”

He’d given Spike his blood when he’d first gotten back, couldn’t have Dru’s sitter benched now could he, so now he was up and mobile again. What to do, what to do?

“Let’s hit the Bronze I feel like partying.” Not to mention, his vixen would probably be there as was her usual. The body and roses had been a good opening move, but now it was time to follow that up with something a little different.

The three of them headed out Drusilla already swaying to music that only she could hear.

Cordelia sat at her usual table at the Bronze, she’d already sent the Cordettes away, and she was not in a party mood right now. The only reason she was even at the Bronze was because she didn’t want to go home yet. As it was she was camping out in her parent’s room at night jumping at every sound.

Well at least someone wasn’t avoiding her. She’d tried to talk to Giles again but he wouldn’t even let her tell him what was wrong he was so worried about Buffy who’d gone MIA that he wasn’t interested in anyone else’s problems. Same thing with Willow and Xander not that she thought they’d be much help any way.

“What are you doing here by yourself, where are your usual adoring fans?”

“I sent them away I’m not really in the company mood.”

“No, you can stay, I just have a bit of a problem and none of the losers will help me out. All too busy trying to find Buffy who’s up and disappeared on them.”

Again with the self-satisfied smirk, like he was happy to hear about Buffy’s trouble with their breakup. Assuming they did break up, it was just as likely that the reason Buffy was MIA was because the two of them had kissed and made up, that is what people in epic love did right, they would fight and then they made up and started again.

Taking a deep breath she couldn’t stop the shiver that ran down her spine at the memory of Rosa. Looking around to make sure no one was listening to them she steeled her resolve to tell him about it.

“I think a vampire killed my housekeeper, Rosa.”

“Really? How do you know it was a vampire?”

“I don’t exactly but there was a message on the wall about how her death was in thanks for her invitation. So vampire.”

He didn’t have that God you’re so stupid look, so obviously her logic was at least in the realm of the possible.

“Wait, wall, where was she killed?”

“In my bedroom. I know right? Ick much. I haven’t been back in there since I found her I’m like living in my parent’s room. I tried to tell Giles about it and ask him what to do but that was a no go thanks to cry Buffy. So, I tried to do some research myself but I got bored like ten second in boy those old guys were really long winded.”

Angelus couldn’t stop smiling she was such a hot mix of sexy and innocent. She was sitting with the very vampire she was so afraid of and had no idea. He thought about telling her, but this was so much more fun. He decided to wait and see who figured it out first, plus being safe helpful Angel had some advantages.

“Cordelia you realize this means this vampire can come into your house whenever he wants now right.” And he would, often.

He could barely contain himself. This was just so perfect.

“Sure Cordelia, you can stay over.”

Cordelia had never been inside Angel’s place before so she took the time to really look when they finally got there, turns out he didn’t live that far from the Bronze. There were books of course, and some art, but what really interested her was the bed. As in singular only one.

She never finished before his lips were on hers. What? Wasn’t he with Buffy? But oh the way he was kissing her was just driving all the thoughts out of her head. He wasn’t like the boys she was used to. Teenage boys fumbled and asked permission. He asked for nothing he just took what he wanted.

He reached up to cup her face before letting his hand drift down gliding over her curves as he went.

“There you go you got your answer, now-” He picked her up forcing her to automatically wrap her legs around his waist as he pinned her against the wall, “where were we?”

He started kissing her neck while she clawed at his shoulders. Her mini-skirt had risen when she’d wrapped her legs around him so his jeans were rubbing against her silk panties cause such amazing friction. Oh, God it felt so good! To hell with Buffy!

He had her. He knew it wouldn’t take much; his vixen had wanted him since the moment she’d laid eyes on him after all. And the fact that the slayer was hiding in his closet watching, he could smell her tears, made it all the better.

Tossing her on his bed he followed after her prepared to give a good show and wondering if the Slayer would watch the whole thing or if she’d break down and come out.

Buffy couldn’t believe what she was seeing. She’d spent most of the night at Angel’s place waiting for him to come home so they could try and work this out. She’d gone into his closet and was smelling his shirts that smelled so strongly of his sent when she’d heard the door open.

Thinking it was him she’d nearly come running out when she’d heard a woman’s voice. Cordelia? Looking through the small crack where the door wasn’t completely closed she saw Angel, her Angel, kiss Cordelia. Then they did so much more. When she’d heard Cordelia ask about her she’d held her breathe hoping that he would come to his senses and kick that slut out on her ass but instead he’d just said that she didn’t mean anything to him at all.

She watched as he tossed her onto the bed, their bed, and she just couldn’t tear her eyes away. This couldn’t be happening.

Cordelia had never felt like this before it was like her entire body was on fire. He had reached up and pulled the neck of her shirt down pinning her arms to her side and baring her breasts to his view and the look on his face when he’d looked at her it was like he’d been waiting for this forever.

At the first stroke of his tongue across her nipple she arched up towards him and couldn’t stop her moan of ecstasy. Just when she’d thought it couldn’t feel any better he pulled her other nipple completely into him mouth and sucked. Oh God!

Releasing her he blew on her breasts causing her nipple to tighten under his gaze the sound of his laugh driving her insane almost as much as the things he was doing to her body.

“Oh God!” That was the last coherent thought she had for a long time.

Angelus held a sated and sleeping Cordelia to his side while he feigned sleep waiting to see what the Slayer would do now. He’d smelled her tears throughout his entire time with Cordelia but also her arousal. Little miss goody two shoes had gotten off on watching him fuck someone else.

Hearing the closet door open he peeked out to see what she would do. He was more than capable of taking her if she decided to attack but he didn’t think she would. Looking at her face he saw so many emotions he nearly laughed. It would seem she didn’t know what to think about this.

She’d headed towards the door at first before hesitating for a moment then turning to head to the bed. She stopped beside it and simply stared, not at him but at Cordelia, interesting. He’d made sure that the sheet was down around her waist leaving her breasts bare and on full display. He’d done it so that he could look at them, and play with them, later that night. It would seem that the Slayer also wanted a peek.

He watched her stare at Cordelia’s chest before looking down at her own. Beautiful she was feeling inadequate and rightfully so; she had nothing on his vixen and never would. To think that if she’d simply gone to school that day and listened to Cordelia about her little vampire problem this whole things would have turned out differently.

Deciding to have a little more fun with her he shifted slightly in his “sleep” and brought his hand up to cup Cordelia’s breast pulling her slightly closer.

Finally she turned and left tears streaming down her face again.

Come for the TB smut, stay for the AB Neg